Eighty percent of the world’s energy comes from fuels. To reach sustainability, fossil fuels need to be replaced with carbon neutral solutions by 2050. In the same interval, the world’s food supply needs to increase by 70%. These two needs compete for arable land; land which will only become scarcer as climate change has an ever-greater impact. To deliver a sustainable food/fuel system it is essential that we find ways to produce fuel from non-arable land and deliver those fuels at a comparable price to current fossil fuels.

Enter algae – half plant, half animal, photosynthesizing green goo. Algae simultaneously disables your pool pump and presents a compelling solution to some of society’s grand challenges. Algae can produce fuel, food and feed on land which would otherwise be useless and, according to Canadian start-up Pond, algae can sequester carbon direct from the smoke stack of a coal or gas fired power plant. 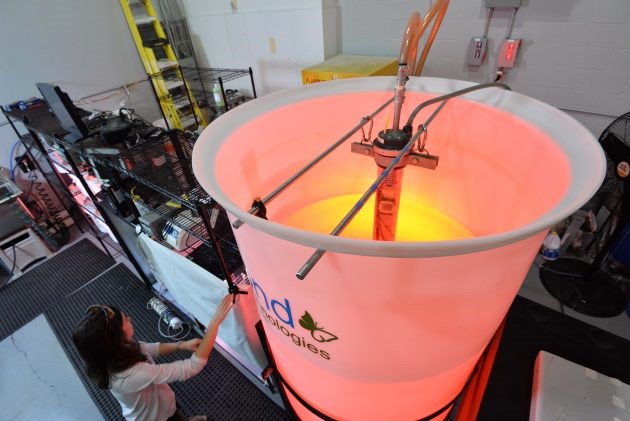 Wiley is always on the lookout for disruptive technologies and ways to reduce the environmental impact of the Australian food industry. Last Friday Ryan Harvey and Rachael Hedges from Wiley had the opportunity to visit UQ algae researchers for a glance of the future.
The first stop was the UQ Algae Energy Farm – a 250,000 L large-scale, low-cost algae biorefinery in Pinjara Hills near Brisbane. Professor Peer Schenk explained the various strains of algae cultivated, the value propositions of each and the myriad of cost saving techniques implemented by the team. While the facility is on the banks of the Brisbane river, it’s clear one could cultivate algae in this way anywhere in the world given sufficient sunshine and water. This unique facility is made world-class by Prof. Schenk’s constant cost saving innovations. From specially engineered hairpin turns to the gas injection system; every part of UQ’s algae growing ponds are optimized to minimize cost and maximize efficiency.

On a previous project, Prof. Schenk has worked with Meat and Livestock Australia (MLA) to develop a low-cost method to produce cattle feed. While this project found it non-viable to produce algae solely for animal consumption, there are other ways forward. High protein animal feed can be derived as a biproduct from the production of other high-value algae. In other words, one can produce omega-3 oil while simultaneously producing feed for a cattle herd. Feeding the herd becomes a bonus income for an already profitable Omega 3 production method and makes use of protein which would otherwise go to waste.

Following the farm tour, it was back to the UQ Saint Lucia campus for a meeting with Professor Ben Hankamer. Prof. Hankamer is the founding director of the UQ Solar Biofuels Consortium and the Centre for Solar Biotechnology. Prof. Hankamer walked through his exciting research. His group has developed the world’s most advanced triple-bottom-line model for algae bio-production. Covering multiple different cultivation and processing methods, the model works to find the optimal way to cultivate algae for a given product and location. The model is unique because it proactively evaluates the economic, social and environmental impacts of any proposed algae facility. This approach gives confidence to a new generation of algae farms, speeding the proliferation and success of algae bio-products.

Prof. Hankamer further discussed his work on a global strategy for biofuels to replace conventional fossil fuels. Using his model, the group have found four locations in the world in which bio-diesel can be produced for less than a dollar per litre. This research points to a possible future in which we use vast algae farms to produce our fuel, pulling carbon out of the atmosphere and running our planes and containerships with the power of algae.

Wiley is always working to bring the best advice and technology to the food industry. Innovations like the ones Professors Schenk and Hankamer have developed are the tools we will use to overcome climate change and deliver a sustainable world. With seismic changes rattling through the consumer food landscape and the energy industry, Wiley is excited to work with academic leaders like UQ to help bring their innovations to the food industry.

When Will Cultured Meat Be Available in Australia?

How a Small Investment Can Make Your Meat Processing Plant Millions

What the 2022 NFF Report Card Means for Australian Beef